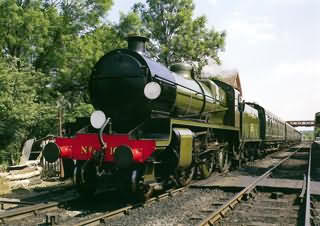 Railways in the south were among the first to be electrified but the romance of steam still lingers on in some places. Since 1960 the Bluebell Railway Preservation Society has operated a steam locomotive service. It now runs from Sheffield Park to Kingscote (by way of Horsted Keynes) and has been a constant source of pleasure to railway aficionados or anyone who likes to live a little in the past.

Sheffield Park station was built in 1882 for the London, Brighton and South Coast Railway. It still has its oil lamps on the platform and Victorian and Edwardian advertisement panels suggesting that passengers buy Rajah cigars at 2d each and Wills Gold Flake cigarettes at 3d for 10. Horsted Keynes station is huge in size, magnificent in architecture and set in the middle of absolutely nowhere. The Southern Railway took it over in 1922 and altered it to the station pattern of those days. It is built in the style of a country house and has five platforms with glazed canopies supported by iron and timber columns.

It is, say, a fine weekend in May and one of the vintage locomotives - there really is one called Bluebell - is getting up steam at Sheffield Park's platform one for the 30 minute chuff to Kingscote. All are aboard. Flags wave, whistles are blown. Choof, choof goes the locomotive and slowly gathers speed until its voice changes into a rhythmic ch-choof, ch-choof. The line climbs 200ft from the Ouse valley through the most glorious countryside to Kingscote - and if it is the right moment in the month of May it really is bluebells, bluebells all the way.