The Old Town of Hastings is a maze of narrow streets, twittens, walks and passages - a world away from the busy business centre and resort first popularised by Dr Baillie in the 18th century. On the seafront are the swings and roundabouts, the amusement arcades, the miniature railway, the boating pool, the candy floss and winkle stalls that attract the trippers. Away towards the Ridge are the factories and office complexes where people work with the hi-tech appliances of the present day but between Castle Hill and East Hill time has stood still. Hastings, which gave its name to the battle which was fought nearby, was once a proud Cinque Port. Now its harbour has gone and many of its old houses and churches are sunk beneath the sea. The castle on the West Hill is in ruins and St Clements Caves, that network of tunnels beneath it, are no longer used to store contraband. In the 19th century they were altered and extended by Joseph Goulding and have been a successful tourist attraction ever since.

The Old Town, however, continues to thrive, just as it did when Titus Gates was curate of All Saints in 1674 and Admiral Sir Cloudesley Shovell's old mother lived in the street leading up to that church. When he was passing Hastings on passage down Channel he asked to be put ashore to visit her. He left, it is said, with tears in his eyes. The 15th century house she lived in is still there with a preservation order on it and the name ‘Shovells’.

The social life of Hastings was concentrated around the Swan Inn on the edge of the Old Town in the 18th and 19th centuries and visitors of the highest rank were lodged in the upper storeys of the houses in the High Street. The Swan was demolished after the last war and the site set out as gardens. Next to it was Old Hastings House where the poet Coventry Patmore, founder of the nearby Roman Catholic church of St Mary Star of the Sea, lived between 1876 and 1891. Its stables have been converted to a theatre. 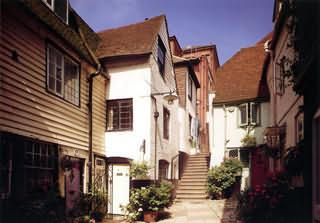