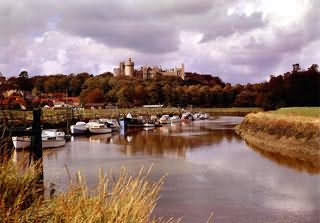 The crenellated towers of Arundel Castle with their arrow slit windows keep up the medieval image of this feudal town. They look as if they have been there forever but they were built only about 100 years ago by the 15th Duke of Norfolk.

There has been a castle here since around 1070 when the town was a thriving port. An early owner was the evil Robert de Belleme, described by the chroniclers of the 12th century as a ‘monster of iniquity and in cruelty pre-eminent among the savages of the age’. He was attainted and stripped of all his possessions. His castle was claimed by the crown and King Henry I willed it to his queen, Adeliza, who later married William d'Aubigny (or de Albini) third Earl of Arundel. King Stephen half heartedly besieged the castle when Adeliza took in her stepdaughter, Matilda, a rival claimant for the throne but the real damage to it was done in 1643 by the Parliamentarians under Sir William Waller. They reduced a lot of it to rubble by cannonfire and occupied the remains until 1649. The castle passed from the d'Aubignys to the Fitzalans and in the 16th century to Thomas Howard, fourth Duke of Norfolk, Earl Marshal and senior peer of England. His heirs and successors have, except for the Civil War period, lived there ever since.

The castle is surrounded, with the exception of the river side where the town creeps right up to its walls, by a park of 1,100 acres. Here, every time a Test team visits this country, it plays the first match of the tour against the Duke's - or the Duchess's - XI, which usually includes a number of Sussex county players. And here also is Swanbourne Lake, its clear waters sparkling between the tree-covered sides of the combe. It is a scene that has been the subject of paintings by Constable, Turner, Vicat Coles and many other artists.

If you have built castles in the air, your work need not be lost; that is where they should be. Now put the foundations under them.
© Thoreau
← back forward →
хостинг для сайтов © Langust Agency 1999-2021, ссылка на сайт обязательна