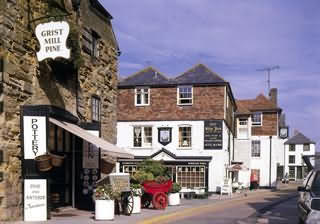 The sea that submerged Old Winchelsea receded from the almost island site of Rye and left it high and dry. A Cinque Port from the reign of Henry II, it is a most attractive town. Old and new buildings snuggle together on the sides of a hill topped by the parish church with its handsome 18th century clock, the quarter boys of which are now fibre glass replicas of the original figures. Everywhere there is history. The first Mermaid Inn was destroyed by the French in 1370 and they have been throwing hot pennies from the balcony of the George Hotel on Maundy Thursdays for hundreds of years. When George I was shipwrecked off Camber in 1726 he was put up by the mayor, James Lamb, in Lamb House until the weather improved. A later tenant was American novelist Henry James and he was succeeded by E F Benson, creator of Mapp and Lucia, those magnificent women who dominated the social life of a fictional Rye called Tilling in the 1920s and 1930s. Benson, incidentally, was also a mayor of Rye.

The town is not oppressed by its past. It still lives and works with it. The Flushing Inn with its 16th century wall paintings is now a fashionable restaurant; the grist mill on the Strand, built of sandstone blocks around 1840, is an antiques shop; and a warehouse on the quayside is a public house. Until recently the council chamber in the 18th century town hall was illuminated by candlelight and it was quite a ceremony when, as the shadows lengthened, the macebearer would solemnly lower the candelabra and light each candle in turn with a taper.