The Romans brought the public house to Sussex so it is only right that Billingshurst should have such a fine example of one in Ye Olde Six Bells. When the legions were using this village as a stopping place between their settlements to the north, south and east and west there was probably a house with a garland of vine leaves on a post outside it to indicate that there was wine within. Perhaps it was locally grown or imported from Gaul. This method of telling travellers where they could slake their thirst was continued by the Anglo Saxons with their ale stakes - the bunches of foliage they had to hang out whenever they had brewed ale for sale - and is continued to this day by inn signs.

Ye Olde Six Bells was originally a farmhouse, dating perhaps from the 15th century. It was later used as a lodging house for tramps and travellers who were presumably also served with ale. Only at the turn of the century did it become a fully licensed public house. Under its Horsham stone roof it has one of the largest stone flagged floors in the county - and also a puzzle from the past. In the main bar is a gravestone used as a fireback. It bears the inscription: ‘Here lies Anne Forster, daughter and heir to Thomas Gaynsford, Esquire, deceased 18th January 1591, leaving behind her two sons and five daughters’. It is one of a number of Anne Forster tombstones used as firebacks. They all have the Ss and Fs upside down and reversed and the spelling and punctuation is archaic - not at all as it is transcribed here. Anne Forster was related to the Culpepers of Wakehurst Place and it is thought that the firebacks were placed in houses that she inherited from her father. Another piece of the past found at the pub was one of the original windows. When an extension was being built, workmen discovered the frame under some tiles they had stripped from a wall. It still had the nails that were used to hold fabric in place over the aperture before glass was in general use.

There is nothing which has yet been contrived by man, by which so much happiness is produced as by a good tavern or inn.
© Samuel Johnson 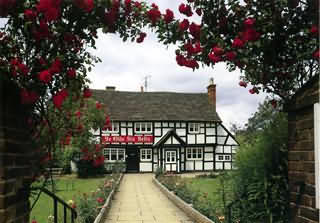