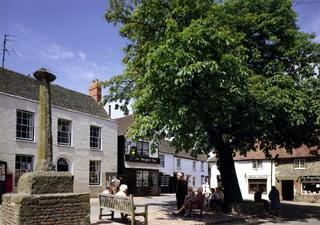 This Downland village has an ancient market cross, smuggling connections, an inn covered with medieval wood carvings, a church steeped in legend and the first property to be purchased by the National Trust. With all these attractions, naturally it attracts many tourists but miraculously manages to remain unspoiled. It has always been a busy village. It was a centre of local trade from around the 15th century reaching the peak of its prosperity during the Napoleonic Wars when there were a large number of troops stationed in the neighbourhood. At about this time the Alfriston Gang were busy running contraband from Cuckmere Haven and distributing it to secret caches in the neighbourhood. Head of the gang was Stanton Collins who lived at Market Gross House, now Ye Olde Smugglers Inne, and he made good use of its six staircases, 48 doors and concealed hiding places to avoid the Revenue men when they called. But the law caught up with him in the end and in 1831 he was transported for seven years for stealing 12 baskets of barley and some sacks.

The market cross was probably first built in 1405 when Henry IV granted Alfriston the right to hold a weekly market. It has been knocked down many times since then and the present structure is not the original one but dates mostly from 1955 when its predecessor was almost totally demolished by a lorry.

The wood carvings in and on the Star Inn suggest that it was once a hospice set up by the monks of Battle Abbey for the care and comfort of pilgrims travelling between the shrines of Canterbury and Chichester.

Let nothing linger after -
No whimpering ghost remain
In wall, or bay, or rafter,
Of any love or pain.
© Rudyard Kipling