The River Arun at Pulborough 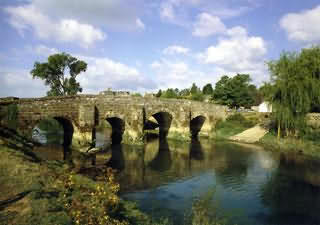 At Pulborough two former links with London meet. A four arched stone bridge carries the Roman Stane Street across the river Arun, once part of the Wey and Arun canal on which cargoes were carried from the coast to the capital. Today there are more reminders of Pulborough's Roman past than of its relatively short career as a town with a waterborne trade. Remains of Roman villas have been unearthed and a temple and a mausoleum have been discovered along Stane Street.

It was in 1785 that the Arun Navigation Company first started to dredge the river above Arundel and for some 20 years from around 1830 coal, china clay and slate were carried by barge from Littlehampton to London. The canals, viaducts, tunnels and locks of the Wey and Arun Canal were used for the last time in 1871. Competition from the railways had killed the canal and for the next 100 years it was virtually forgotten. Its tunnels caved in, its viaducts collapsed, its locks crumbled away and whole sections were built over. In the 1970s a scheme to restore the waterway was launched and for years volunteers have been toiling away at weekends to get the locks working again and to dredge out channels long silted up. While this work goes on the Arun continues to flow peacefully through Pulborough with not a single bit of commercial traffic to disturb the many anglers who line its banks.

The Swan Inn by the bridge has had the river in its cellar many times for the low lying water meadows to the south are prone to flooding although the Water Board has done its best to ease the annual inundation.

He who knows not his way straight to the sea should choose the river for his guide.
© Plautus
← back forward →
хостинг для сайтов © Langust Agency 1999-2021, ссылка на сайт обязательна