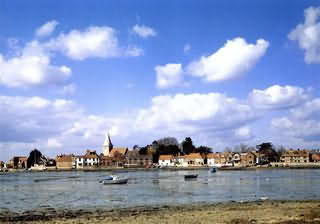 The wooded waterside village of Bosham was once one of the chief towns of Sussex. Vespasian, commander of the Second Legion had a villa here during the Roman Occupation and in the seventh century an Irish monk called Dicul built the first church in Sussex on its shore and set out to convert the South Saxons to Christianity. He had little success, for the Saxons proved difficult to convert. ‘Will be led, won't be druv’ has always been the county motto.

And it was from Bosham in 1064 that Earl Godwin's son Harold embarked to visit William, Duke of Normandy - a visit William was to return with interest in 1066. The Bayeux Tapestry, which records in needlework the Norman Conquest and the events that led up to it, shows Harold visiting Bosham church, drinking in the village alehouse and boarding his galley accompanied by assorted soldiery.

Another king whose name is linked in legend with Bosham is Canute. Certainly he was here with his father, Svein the Dane, on a raid in 1049 but it is doubtful that he had a manor here, that his daughter is buried in the church and that his famous confrontation with the tide took place in the estuary.

It was during one of these raids by the Danes that the bells from the church were carried off as plunder. But they did not get far. The galley carrying them foundered under their weight and sank to the bottom of the sea. Today, it is said, whenever a peal is rung on the present bells, it is answered by a peal from the deep…

At high water Bosham is beautiful. Boats bob at anchor or sail about the bay - it is a scene that has inspired many a contributor to the Royal Academy summer exhibitions. The only people not to appreciate it are the unfortunates who, like Canute, make a miscalculation about the tide and return to find the cars they had parked on dry land are over their wheels in water.