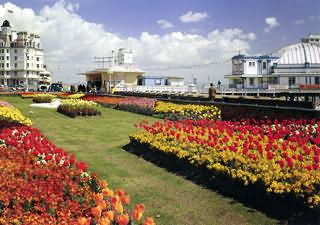 It was around 1904 that the Carpet Gardens first appeared on the Grand Parade near the pier at Eastbourne. Who first thought of adorning the sea front with a tapestry of flowers and fountains, grass and hedges, is not known. Before 1904 illustrations of this area show no gardens.

After 1904 they are on picture postcards. In pre-war guides to the ‘Suntrap of the South’, as Eastbourne was described in the 1930s, a flagstaff with a pennon advertising the adjacent Burlington Hotel was planted firmly in the middle of the gardens perhaps indicating a common ownership. The hotel's ground landlord was the 7th Duke of Devonshire, the lord of the manor and principal landowner who did so much to turn Eastbourne into a fashionable watering place. He was responsible for its tree-lined roads, its fine houses, its plethora of parks and its air of elegance which it retains to this day.

The three mile long sea front on which there is not a single shop - by order of the borough council - are two reminders of the Napoleonic Wars, the brick built Redoubt and the Wish Tower, one of the Martello towers which formed a defensive line along the south coast. The cannon on top of it has been restored and once again faces out to sea and the tower appropriately houses a Coastal Defence Museum. The Redoubt, which has given hospitality to concert parties, children's entertainers and been a roller skating rink since it was vacated by the militia, has now returned to its military beginnings and contains the Sussex Combined Services Museum.

Eastbourne has entertained many thousands of holidaymakers, among the first being three of George III's children. The composer, Claude Debussy, was here in 1905 in search of solace after the breakdown of his first marriage. Obviously he did not receive it for he wrote somewhat acidly that he found Eastbourne: ‘A little seaside town, silly as these places sometimes are’ and with ‘too many draughts and too much music’.

To nurse the flowers, to root up the weeds, is the business of the gardener.
© Bodenstedt
← back forward →
хостинг для сайтов © Langust Agency 1999-2021, ссылка на сайт обязательна