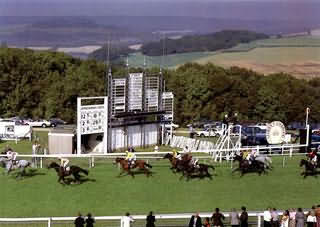 Glorious Goodwood, that week in July when the world of racing comes to Sussex, the sun always shines and everyone's a winner, had a decidedly shaky start. It was launched in 1802 by the 3rd Duke of Richmond and Gordon, he who built the Martello towers along the coast when Napoleon threatened to invade. He also spent vast sums on extending Goodwood House to its present magnificence and died with debts of £150,000. Before the 1803 meeting at Goodwood the stewards were forced to announce that they could not provide £50 for the handicap sweepstake because many of the promised subscriptions to the racing fund had not been paid.

Royal interest in racing revived Goodwood's fortunes. Edward VII and Queen Alexandra brought the Prince of Wales (later George V) and his wife down in 1903 to stay at Goodwood House. ‘Numerous dainties for the table’ were sent down from Windsor and some items of furniture from Buckingham Palace. They were here again in 1904 and 1905 and the king was a winning owner of the Sussex Stakes with Minoru, ridden by Herbert Jones.

It was not only horses which lined up at the start between 1948 and 1966. A motor racing circuit was established by the 5th Duke of Richmond and Gordon, a well known racing driver of the 1930s, on the wartime airfield of Westhampnett. The rich and famous would come by air to watch the Formula One monsters hurtle through the chicane. The setting of the circuit was scenically superb but, as speeds got faster and faster the potential danger for spectators increased so much the motor racing had to stop. Today the track is used for testing and trials plus the occasional vintage car event. The Champagne shaking champions are there no longer, alas.

The horse thinks one thing, and he that rides him another.
© proverb
← back forward →
хостинг для сайтов © Langust Agency 1999-2021, ссылка на сайт обязательна