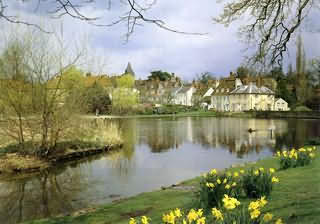 In the quiet country town of Midhurst the curfew is still tolled each evening at eight from the church in memory, it is said, of a traveller who lost his way through the surrounding woods one dark and stormy night. It was the sound of the evening bell that led him to safety and in gratitude for his deliverance he left the income from some land to endow the ringing of the curfew in perpetuity.

Other reminders of the distant past include the 16th century Market House, and two famous inns. The Angel got its name from a group of emigrants on their way to Southampton to sail on the Mayflower to the New World. Tradition has it that they gave the name, the Angel, to each of the inns that received them kindly. The Spreadeagle, a former Tudor hunting lodge and now a three star hotel, is, according to Hilaire Belloc, ‘the oldest and most revered of all the prime inns of the world’. Midhurst has a rather dubious electoral past. It was not exactly a rotten borough but it did return its two MPs with votes drawn from stones rather than from people. The right to vote was vested in certain tenancies and, when one of the Montagues demolished some of them to make room for the wall he wished to build around Cowdray Park, he kept the voting rights by writing ‘A Burgage’ on the stones that crossed the site of the tenements. These stones duly voted at each Parliamentary election.

It is hard to separate Midhurst from Cowdray, the burnt out shell of which still stands in dignified dereliction down by the river. Once Queen Elizabeth I was lavishly entertained here, her household consuming three oxen and 140 geese for breakfast. Nowadays it is the polo rather than the provender that brings Prince Charles to Cowdray Park.

Towns are the dwelling places of mortals; the gods inhabit rural retreats.
© Rousseau