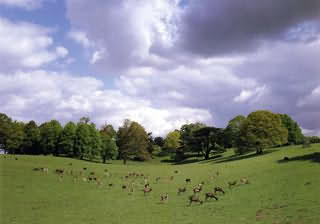 Petworth House is not in the centre of its park but at the southern end of it, practically in the town itself. Next to the massive entrance gates with its lodges is the church. Opposite the gates is a row of shops. Drivers taking the A285 north have a high wall screening the park on their left, but travellers on the A272 to Midhurst have a wonderful view of its green hills and valleys and its herds of deer. Much of it now belongs to the National Trust but when it was all owned by the third Lord Egremont, who allowed the title to die out by default, artists of the eminence of W J Turner were often entertained there. Turner preferred fishing in the lake to painting in the park but old Lord Egremont was prepared to wait. ‘I want a picture when you have time, but remember, none of your damn nonsense’ he would say - and he would get his picture of the sunset slanting over the parkland and the deer hazy in the distance.

The pictures Turner painted are in Petworth House together with the carvings of Grinling Gibbons, commissioned by the Duke of Somerset who built the house between 1688 and 1696. There are also portraits by Van Dyke of the Percys of Petworth including one of the Wizard Earl who had an interest in alchemy and was imprisoned in the Tower for 16 years for his suspected part in the Gunpowder Plot. These paintings are an important historical record, even the later ones such as the Turners. For the park he painted, with its tree lined avenues, looks very different today after the devastation it suffered on the night of October 16, 1987 when hurricane force winds swept across the county.

Every animal loves itself.
© Cicero