It was not until the last year of the 19th century that Brighton's Palace Pier could be seen against the sunset. The pier building boom which started in the 1860s was virtually over when a company was formed to build a replacement to the old Chain Pier. This had acted as a landing stage for seaborne visitors, including Queen Victoria, since it was built by Captain Brown in 1822, but Channel storms had damaged it severely and it was sold to the Marine Palace and Pier Company in 1891, soon after which the last pile of its replacement was driven into place, in a high wind and with much civic ceremony, by the Mayoress of Brighton, Mrs S. H. Soper.

The Chain Pier collapsed totally on the night of December 4th 1896 - and at about the same time so did the Marine Palace and Pier Company. In 1897 an order was made for the winding up of the company and it looked as if Brighton was to be left with an unsightly half completed structure covered by hoardings at its shoreward end, until local philanthropist John (later Sir John) Howard came to the rescue. He bought the half finished structure and completed it in time for an official opening on May 20 1899. The total cost of the pier, when it was finally finished in 1901, was £137,000. It was a real pleasure pier, 1,760ft long and with a maximum width of 189ft. Its designer, R. St G. Moore, much influenced by the Oriental splendours of the Royal Pavilion, has arches of lacy ironwork everywhere topped with elaborate crestings. Later additions have been made to, match. The Palace Pier theatre at the pier head, added in 1901, has a very Oriental outline, and so has the Palace of Fun in the centre which was a concert hall before 1910.

They counted them at break of day
And when the sun set, where were they?
© Lord Byron 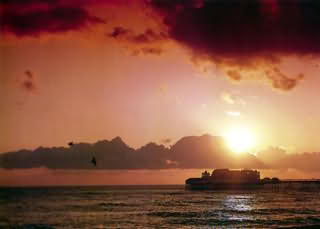