One of the few compensations for being stuck in a traffic jam on the A259 coast road between Brighton and Newhaven is the magnificient view to the south of the English Channel as the waves lap or crash against the cliffs. The road cuts most of the residents of Rottingdean off from this view although they can always savour it from the undercliff walk that extends from Saltdean to the east to Kemp Town to the west. Some 15ft above sea level, the remains of a raised beach from a past Ice Age can be seen.

Until the advent of the motor car and coach Rottingdean was a cluster of houses and cottages around the village green, pond and church. Since then it has grown considerably but still retains its village heart. Rudyard Kipling lived here, in an 18th century house called the Elms, until 1902 when he moved to the greater privacy of Bateman's at Burwash. Another famous resident was Royal Academician Sir Edward Burne-Jones. He lived at North End House from 1880 until his death in 1898 and it was from his designs that William Morris made the stained glass windows in the chancel and tower of the village church.

When smuggling was a major Sussex industry, the villagers of Rottingdean took an enthusiastic part in it. The sails of the smock mill were used to signal to the captains of ships waiting to land contraband when it was safe to do so and more often than not it was the vicar who set the sails. The Rev Dr Thomas Hooker, who was in charge of the parish from 1792, also ran a school from his vicarage and among his pupils were Cardinal Manning and Lord Lytton. This vicarage, later altered by Sir Edwin Lutyens to become the home of another painter, Sir William Nicholson, is now a museum with rooms devoted to the work of the artists and writers who have lived in the village.

And here the sea-fogs lap and cling
And here, each warning each,
The sheep-bells and the ship-bells ring
Along the hidden beach.
© Rudyard Kipling 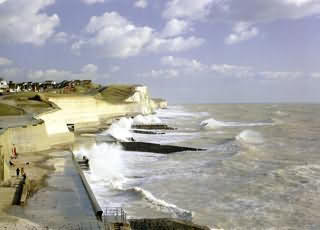