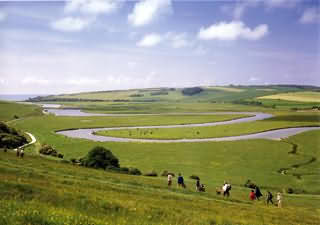 The watercourse which snakes through the valley between Seaford Head and the Seven Sisters is called the Meanders. Once there was a flourishing village here but it was abandoned, probably because of the Black Death, which killed off nearly half the inhabitants of the kingdom in two terrible years in the 14th century. All that is left of the village of Exceat, apart from the hill that bears its name, is a memorial stone marking the site of its church. It bears the inscription: ‘Here formerly stood the parish church of Excete built probably in the XIth century and abandoned in the XVth century, the parish being incorporated with West Dean. The foundations were uncovered under the supervision of the Rev G W A Lawrence, Rector of West Dean and the Sussex Archaeological Society and the site preserved by the Ecclesiastical Commissioners’.

A new cut from the road bridge to the sea was made for the Cuckmere in 1846 to improve drainage and prevent flooding. At least 100 years before that the river was navigable for small barges to a mile or so above Alfriston. A gravestone in the churchyard there records the fact that John Lower (second son of Henry Lower) and parish clerk of Alfriston for 18 years, was the first person to navigate the Cuckmere River to the village. He died on 21st August 1801, at the age of 66. In 1915 the barge Iona made her last journey up river from Seaford with her usual cargo of beach and chalk. During the last war a German mine also made its way to Alfriston. On 27th October 1943 it drifted up on the incoming tide and the village was evacuated for some hours while a naval bomb disposal team defused it. The mine has been preserved near the church on the Tye.

Follow the river, and you will get to the sea.
© proverb
← back forward →
хостинг для сайтов © Langust Agency 1999-2021, ссылка на сайт обязательна